Home
Products
About Us
Factory Tour
Quality Control
Contact Us

Hello Lisa! Thanks for quick reply. On-time delivery. And support is good and fast. Regards Laurie.

Have been business relationship for 3 years, great partner for Engine Cooling Parts.

FUEL PUMP REPLACEMENT INSTRUCITONS
I. Preparations
A. Fuel systems are under pressure.It is necessary to relieve the fuel system pressure before beginning work on the fuel system. Relieving the pressure can be done by removing the fuel cap.
1. Locate and remove the fuel pump fuse from the fuse block.
2. After the fuse is removed, start the engine and left the engine consume the remaining gasoline in the fuel lines.The engine will stop when stop when remaining fuel is consumed.
3. Once the engine has stopped, crank the engine for three seconds to relieve any possible remaining fuel pressure.
B. Disconnect the vehicles negative/ground cable at the battery and secure it so that it will not accidentally make a connection while replacing the fuel pump.
C. Drain the gasoline from the vehicle's fuel tank.
1. Using only and OSHA approved gasoline transfer pump and approved fuel storage containers, remove as much gasoline as from the fuel tank through the filler neck.
2. Raise the vehicle with an automotive hoist or jack up the vehicle and support it with OSHA approved jack stands, which allow unobstructed clearance for the removal of the fuel tank.
3. Fuel tank gasoline levels will vary depending on the amount of gasoline removed through the filler neck. Once the vehicle is raised, additional gasoline can be removed through bracket connections.
II. Fuel Tank Removal
Fuel tanks vary from vehicle to vehicle; the following fuel tank removal instructions are for a typical fuel tank removal. For more specific instructions on fuel tank removal for your specific vehicle it may be necessary to obtain an approved service manual for the vehicle that you are replacing the fuel pump on.
1. Visually inspect the scope of work involved before beginning the fuel tank removal step.Be sure to have help readily available.
2. Disconnect all visible fuel hoses that connect to the fuel tank from the rest of the vehicle (be sure to mark or label all connections for reassembly).
3. Disconnect electrical connections at the fuel tank taking extra care not to damage pins or connectors.
4. If necessary, disconnect and remove the fuel filler neck from the vehicle.
5. Loosen the retaining straps of the fuel tank and support the fuel tank prior to removing the straps entirely. Take extra precautions to avoid a fuel spill.
6. Take note of the condition and location of any insulating pads.Worn or misaligned, wrongly installed
pads should be replaced as they may affect the performance of the new fuel pump.
III:Bracket Removal
1. Before removing the bracket from the fuel tank,be sure to thoroughly clean any dirt or debris that may have accumulated at the top of the fuel tank or at the opening of the locking ring area.This step must be done to prevent debris or foreign matter from entering the fuel tank which can cause problems later on.
2. Using the correct tppls,remove the locking ring or retainer using care not to damage it.
3. Carefully lift out the bracket from the fuel tank. The old O-ring seal must be removed using extra care not to let pieces fall into the tank as it may be brittle. Discard the old O-ring seal,it will be replaced with a new O-ring seal which is included in the kit.
Picture Show : 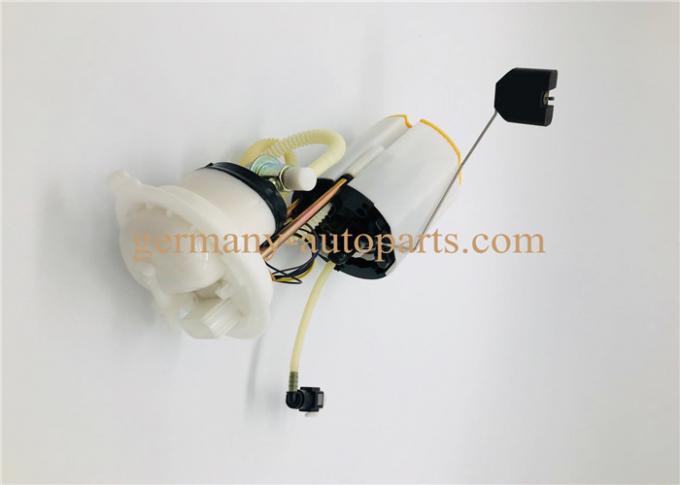